Even at the distance of a century, no war seems more terrible than World War I. In the four years between 1914 and 1918, it killed or wounded more than 25 million people–peculiarly horribly, and (in popular opinion, at least) for less apparent purpose than did any other war before or since. Yet there were still odd moments of joy and hope in the trenches of Flanders and France, and one of the most remarkable came during the first Christmas of the war, a few brief hours during which men from both sides on the Western Front laid down their arms, emerged from their trenches, and shared food, carols, games and comradeship. 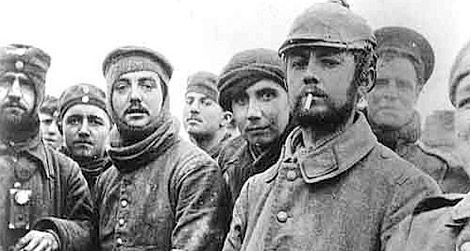 British troops from London during the Christmas Truce with Saxons of the 104th and 106th Regiments of the Imperial German Army.

Their truce–the famous Christmas Truce–was unofficial and illicit. Many officers disapproved, and headquarters on both sides took strong steps to ensure that it could never happen again. While it lasted, though, the truce was magical, leading even the sober Wall Street Journal to observe: “What appears from the winter fog and misery is a Christmas story, a fine Christmas story that is, in truth, the most faded and tattered of adjectives: inspiring.”

The first signs that something strange was happening occurred on Christmas Eve. At 8:30 p.m. an officer of the Royal Irish Rifles reported to headquarters: “Germans have illuminated their trenches, are singing songs and wishing us a Happy Xmas. Compliments are being exchanged but am nevertheless taking all military precautions.” Further along the line, the two sides serenaded each other with carols—the German “Silent Night” being met with a British chorus of “The First Noel“—and scouts met, cautiously, in no man’s land, the shell-blasted waste between the trenches. The war diary of the Scots Guards records that a certain Private Murker “met a German Patrol and was given a glass of whisky and some cigars, and a message was sent back saying that if we didn’t fire at them, they would not fire at us.”

‘Come out, English soldier; come out here to us.’ For some little time we were cautious, and did not even answer. Officers, fearing treachery, ordered the men to be silent. But up and down our line one heard the men answering that Christmas greeting from the enemy. How could we resist wishing each other a Merry Christmas, even though we might be at each other’s throats immediately afterwards? So we kept up a running conversation with the Germans, all the while our hands ready on our rifles. Blood and peace, enmity and fraternity—war’s most amazing paradox. The night wore on to dawn—a night made easier by songs from the German trenches, the pipings of piccolos and from our broad lines laughter and Christmas carols. Not a shot was fired. 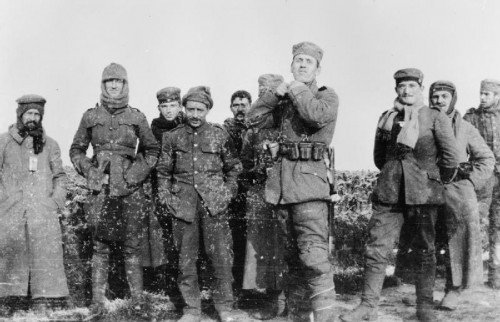 Men from the Royal Dublin Fusiliers meet their German counterparts in no man’s land somewhere in the deadly Ypres Salient, December 25, 1914.

Several factors combined to produce the conditions for this Christmas Truce. By December 1914, the men in the trenches were veterans, familiar enough with the realities of combat to have lost much of the idealism that they had carried into war in August, and most longed for an end to bloodshed. The war, they had believed, would be over by Christmas, yet there they were in Christmas week still muddied, cold and in battle. Then, on Christmas Eve itself, several weeks of mild but miserably soaking weather gave way to a sudden, hard frost, creating a dusting of ice and snow along the front that made the men on both sides feel that something spiritual was taking place.

It was only in the British sector, then, that troops noticed at dawn the Germans had placed small Christmas trees along parapets of their trenches. Slowly, parties of men from both sides began to venture toward the barbed wire that separated them, until—Rifleman Oswald Tilley told his parents in a letter home—”literally hundreds of each side were out in no man’s land shaking hands.”

In most places, up and down the line, it was accepted that the truce would be purely temporary. Men returned to their trenches at dusk, in some cases summoned back by flares, but for the most part determined to preserve the peace at least until midnight. There was more singing, and in at least one spot presents were exchanged. George Eade, of the Rifles, had become friends with a German artilleryman who spoke good English, and as he left, this new acquaintance said to him: “Today we have peace. Tomorrow, you fight for your country, I fight for mine. Good luck.”

The war was on again, and there would be no further truce until the general armistice of November 1918. Many, perhaps close to the majority, of the thousands of men who celebrated Christmas 1914 together would not live to see the return of peace. But for those who did survive, the truce was something that would never be forgotten.